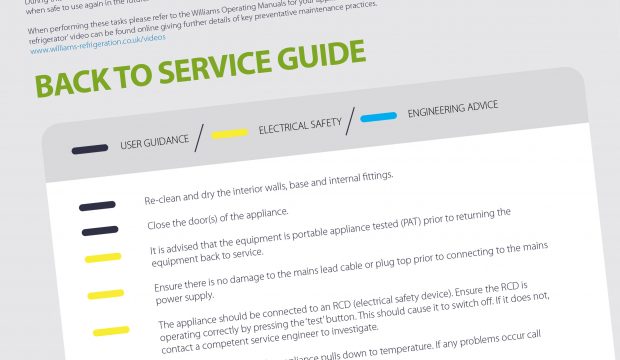 Williams guides explain how to recommission fridges and coldrooms post-lockdown

Find out what needs to be done to get your refrigeration working again safely.

Bottle coolers that beat the heat

New British fridges from Precision are happy to work out in the midday sun Stand Z-L38, Gulfood 2015, Dubai World Trade Centre, Dubai, 8th February – 12th February A big issue with bottle coolers in outdoor locations in the Middle East is that they just don’t work – the sun is too hot. Now British refrigeration manufacturer Precision has launched a range of bottle coolers designed specifically to cope with the heat – in fact, they’ll operate in ambient temperatures...

It’s a freezer, or a fridge, in a drawer British manufacturer Precision has launched a new self-contained refrigerated drawer that the company claims is the most energy efficient on the market – and the most economic to buy. The drawer, model VSS 121, is part of the Space Saver range and is designed to be as versatile as possible.  Its fire-rated worktop means cooking equipment such as a grill can be mounted on top of a single unit.  Alternatively, two...

Doors or drawers increase design flexibility on True’s TUC undercounter fridges and freezers True fridges and freezers are built to last. Every fridge manufactured is run tested before leaving the factory, ensuring reliability as well as peace of mind.  And True goes one step further offering an industry leading, three years parts and labour, and five year compressor warranty at no additional charge.

Norfolk pub, renowned for food and art, gets peace of mind with British-built refrigeration With its emphasis on local, seasonal produce – including whole venison – The Gunton Arms in North Norfolk relies heavily on its refrigeration.  The unusual and highly praised venue, which opened late in 2011, invested in a complete new kitchen which was installed by Eximius Projects.  A variety of Precision counter fridges and freezers were specified.