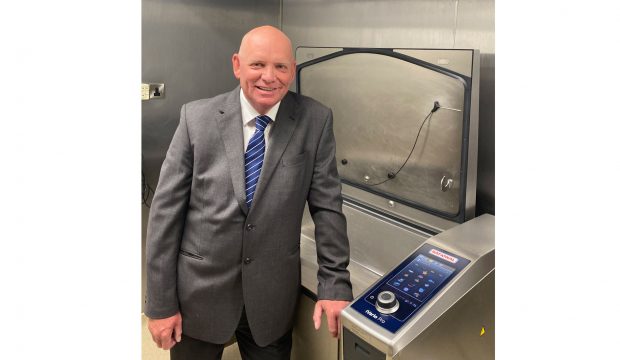 The Rational iVario Pro has won the Energy Efficiency Innovation in Heavy Catering Equipment award at this year’s Irish Foodservice Suppliers Awards (IFSAs).  While the award winners were unveiled in an online ceremony on 17th June, the winning products will be on display later this year in a special enclosure at the CATEX show (RDS Dublin 2-4 November).

Announcing the award, chair of judges Maurice Bergin, managing director of GreenHospitality.ie, described the iVario Pro as a ’market leader in energy efficient cooking.’  He also noted that the iVario Pro is the only multifunctional cooking appliance in its category recognised by the HKI certification data base.  This offers easy, fast and free access to energy consumption figures, with comparative data based on set guidelines, helping buyers make the best decision for their requirements.

The iVario Pro was entered for the awards by Rational DEAL Dealer Stephens Catering Equipment, whose commercial director Conrad Greene said, “The iVario Pro is a truly impressive multifunctional cooking system and is a worthy winner of this award.  Our customers are amazed when they see it demonstrated, because it is so innovative and versatile.”

The iVario Pro’s sustainability credentials are unrivalled in its equipment category.  It can boil, deep fry, shallow fry and pressure cook, delivering an energy saving of up to 40% compared to conventional cooking devices. The patented iVarioBoost heating system delivers up to 94% energy efficiency with quick and precisely controlled power from the ceramic heating plates.  Preheating to 200°C in under 2½ minutes, the precise temperature control ensures that the system only uses as much energy as is required. Already up to four times as fast as conventional appliances, the iVario Pro’s pressure cooking option further reduces cooking times, by up to 35%, helping to save not only time but energy as well.

Although connected loads have been reduced compared to its predecessor, the iVario Pro has up to 20% higher searing capacity.  It is also fully compatible with energy management technologies such as the Sicotronic Energy Optimisation system.

Rational sales director Sandy Thomassen (pictured) heads the company’s team in Ireland.  “We’re absolutely delighted that the iVario won this award,” he says.  “As an industry we have to focus on sustainability and the environment, in order to leave a better and safer world for our children and grandchildren.”