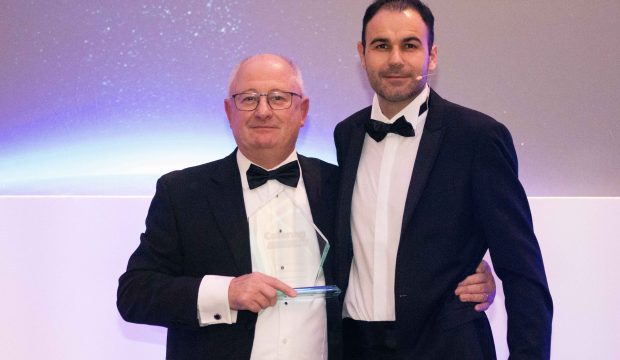 FEM has won Catering Insight’s Light Equipment Supplier of the Year Award for 2019.  It’s the third time the company has won the prestigious award, following wins in 2016 and 2017.  FEM’s Sales manager Martin Shaw picked up the trophy at a glittering awards dinner in the Banking Hall, London, on November 28.   “What makes this one so special is that it’s our distributors who vote for it,” he said.  “This makes an awards hat trick and we’re so proud to be here and win it again. Thanks to everyone for voting for us, we really appreciate your support.”

The awards are organised by Catering Insight, whose editor Clare Nicholls said, “FEM proved to be the runaway winner with a huge 56% of the vote.”  She added that, as well as launching a new website for distributors this year, FEM had “once again added a smorgasbord of products to its roster.”   New launches included Hamilton Beach’s CPM800-UK planetary stand mixer, Manitowoc Ice’s Indigo NXT Series modular dice ice cube machine range, San Jamar’s ice scoop alarm monitor and Pujadas Polinorm lids, designed specifically to fit with its allergen-free range of GN pans.

Martin Shaw gave an honest assessment of 2019.  “It’s been a good but challenging year. Times are hard, but we keep pushing, keep finding new innovative products to take to the marketplace.  That’s what it’s about, bringing innovation to the market.”

New product launches already in the pipeline include coloured cookware and terracotta melamine.