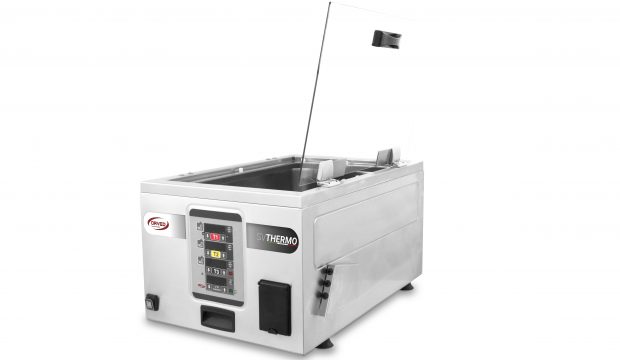 Taylor UK has launched a new sous vide water bath that offers a new level of cooking control, using probes to monitor the internal temperature of the vacuum-packed food as it cooks.  The Svthermo, manufactured in Italy by Orved, is a thermostatic bath that gives chefs the opportunity to cook to precise temperatures.  It has 99 programs, including a delayed timer for overnight cooking at low temperatures.

The Svthermo has three temperature probes, ensuring ultra-accurate cooking results.  The probes are inserted through the vacuum-packed food bag via Orved’s clever SYV (Save Your Vacuum) valve.  The SYV valve is made of stainless steel, it’s entirely food safe and can be used time and again, with any type of vacuum bag.   It creates an effective barrier, protecting the vacuum while allowing the probe to pass through and into the food.  The Svthermo also has a sensor in the tank, controlling the water temperature.

A compact countertop model, the Svthermo measures 427mm wide by 675mm deep and 365mm high, and the tank complies with GN1/1.  It comes with a basket and removable dividers that can be used to hold product vertically while it cooks.

Being mains-connected, the Svthermo can automatically fill and discharge water with no need for manual filling or emptying.  However, where required, such as at outdoor events, the unit can be filled by hand.

Temperatures for the three probes and the tank sensor are clearly displayed on the front of the Svthermo.  Meanwhile the tank is covered by an anti-shock glass lid, which stays clear during the cooking process so chefs can visually check contents.  Made of stainless steel, the Svthermo has ergonomic handles allowing it to be moved easily.  Water connection is via solenoid valves, two for inlet (hot and cold water) and one for drainage.  Smart features include the option of choosing the automatic cooling process, which loads cold water once cooking has finished.

“The Svthermo is simple to use and offers unprecedented control of the sous vide process,” says David Rees, marketing manager at Taylor UK.  “Slow, low-temperature cooking in water produces outstanding flavours, while preserving the nutritional values of the food.  Given its precision and temperature range, we like to call the Svthermo a water oven rather than a bath!  It really raises the sous-vide bar.”