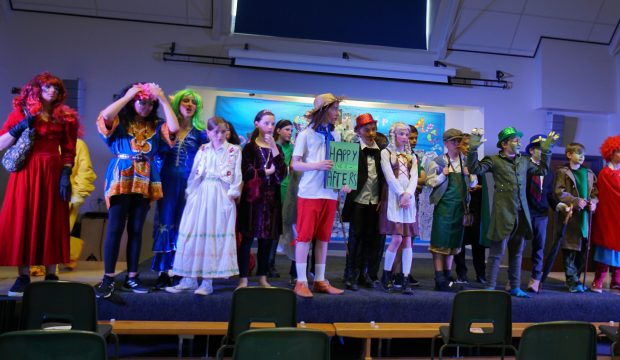 The children at Aldborough Primary School get very excited at panto time.  The Year 6 children, along with their class teachers Jill Morgan and Claire Taylor, write and perform the show which usually manages to lampoon a few notables, both local and national.

This year, what with Christmas being cancelled, the panto nearly didn’t happen.  But you can’t keep a good team down, so in the last week of the Summer term the show went on, much to the hilarity of the parents and visitors who got to see it.

‘In Search of a Happy Ever After’ was the slightly poignant title, but don’t worry: the jokes about head teachers, SATs and the Department of Education still flew thick and fast.

The plot involved a panel deciding which were the best moments of pantos past – the Giant chasing Jack?  The Wolf being dazzled by Little Red Riding Hood?  The woodcutter inadvertently losing his way?  “One of the issues we have with the Aldborough panto is that there are so many speaking parts,” says Jill Morgan.  “So we tend to bring in a few characters from other pantos anyway.  It wouldn’t be out of the ordinary to find, say, the three little pigs arguing with the three bears over which direction Sleeping Beauty and Goldilocks went in the enchanted forest….”

Head Teacher Helen Bearman says the parents absolutely loved the show.  “This year we had to restrict the number of spectators, to keep to government guidelines, but the audiences were incredibly enthusiastic.  It’s wonderful to see the children perform at such a high level, building up their self-confidence while having such fun.  And soaking up the booing and cheering, of course!

“Hopefully this Christmas we’ll be able to get back to the normal schedule – having to prepare both the panto and the leavers’ assembly in such a short space of time was very demanding, on both the children and the staff!”

Anyone interested in finding out more about Aldborough Primary School will find more information on the school’s website at www.aldborough.norfolk.sch.uk