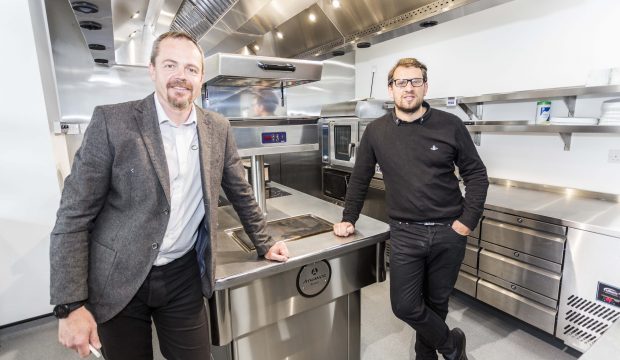 Raby Hunt’s fridges get the beauty and the brawn

Williams’ good looking, hard-wearing counters fit the bill at two Michelin star restaurant You don’t make major changes to a two Michelin star kitchen without good reason, and certainly not without ensuring you have the best expertise at hand.  So when chef owner James Close decided to install a new kitchen and expand the Raby Hunt restaurant from 25 to 35 covers, he called in Crosbys, the kitchen specialist based in Newcastle upon Tyne.  And when Crosbys specified the refrigeration,...

700 plates, 800 glasses, one dishwasher and one glasswasher Winterhalter has massive impact on efficiency at two Michelin star venue The two Michelin star Restaurant Sat Bains with Rooms in Nottingham celebrates modern British cuisine with seasonal produce from around the UK.  The tasting menu format means that, while the restaurant only has around 45 covers, up to 700 plates can be used during each service.  That’s a whole lot of washing up and, says Sat Bains, it needs to...

Is this the end of polishing fine glasses?

Pollen Street Social Club’s new Winterhalter glasswasher system avoids the need to polish. “It’s a revelation,” says Jason Atherton. Jason Atherton’s vision for the Pollen Street Social Club is to provide fine dining in a relaxed, fun atmosphere.  The vision is working: the Michelin starred restaurant is booked months ahead, typically serving 100 at lunch and 130 at dinner. As with any great restaurant, the drinks service is a critical part of the success.  Over a hundred customers at each...