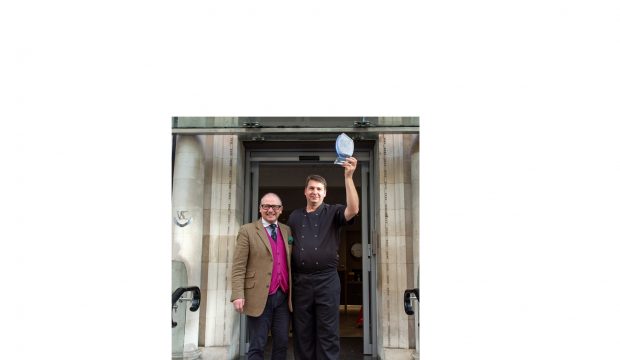 “An exceptional candidate” is the judges’ unanimous choice

The winner of the 2022 Kitchen Porter of the Year competition has been announced. He is Michael Toader of the Victory Services Club in London.

The competition, in its ninth year, is the brain child of Winterhalter UK. It was created to recognise the importance of KPs in the catering and foodservice industries. Since 2013, restaurants, pubs, hotels, schools and contract caterers have nominated their staff to celebrate the vital but often underappreciated work they do.

This year’s entries were of a particularly high standard, but Michael’s was the only one to be awarded top marks by every judge.

“I’m happy, so very very happy,” Michael said as he received the award from Winterhalter UK’s managing director Stephen Kinkead in a special presentation at the Club.  He went on to describe working at the Victory Service Club as like being part of a family.  “The KP is the best job for me!” he added.

The panel of judges were particularly impressed by Michael’s dedication to the role and his “unequalled work ethic”. Paul Mattocks, executive chef at the Victory Services Club, nominated Michael and outlined some of his achievements in his application.  For example, he included how Michael moved into the Club for six months during the pandemic in order to provide meals for key workers along with a skeleton team of staff, and how he has taken the lead on tending the Club’s rooftop vegetable and herb garden.

Michael has worked his way up from an agency KP role to become head kitchen porter, helping to train new staff and reinforcing the high standards expected at the Club. He is constantly looking to improve working processes to increase the KP teams’ productivity and has taken on additional responsibilities such as energy warden, finding ways to reduce the kitchen’s energy consumption. In 2021 he was the Club’s employee of the year, having been unanimously selected by 80 employees.

“I loved the fact that Michael called up to wish team members a happy birthday while he was on holiday,” says Deborah Homshaw. “Little things like that make a huge difference to the team, he’s a fantastic winner.”

Jame Horler agrees. “He was a standout candidate, from a quality venue, demonstrating real commitment to the role of KP.”

“It was easy to pick Michael as the winner,” says Stephen Kinkead. “He is the epitome of the ideal kitchen porter.”

As overall winner, Michael wins £1000 as well as a celebratory meal for family and friends at a casual dining restaurant of his choice, while the Victory Services Club wins one of Winterhalter’s products worth up to £8000.

The runners up were Gerry Daly of Cameron House, Scotland and Victor Shooter of Baxterstorey, London. Lango Wyaba of Le Cordon Bleu, London and Remy Tingson of The Red Lion (Fuller’s), London were both highly commended. All four were awarded a cash prize for their efforts and will also receive a special KP of the Year apron, as will all the entrants.