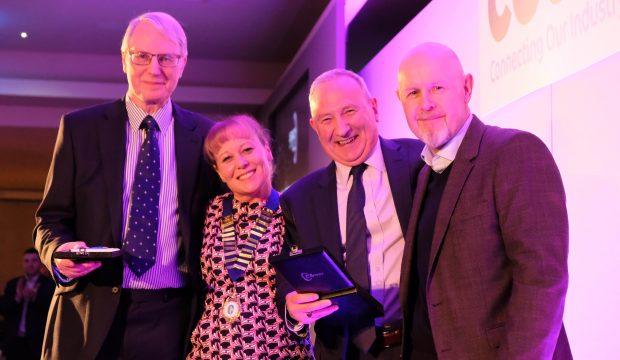 CEDA has acknowledged the contribution to the catering equipment industry by FEM’s founders Harry Hogan and Jim Doherty by awarding them Legacy Honours.  The awards are for ‘outstanding individuals who have played a role in creating a tangible legacy that has made a considerable positive difference, enriched lives, served with dedication, passion and commitment and have cast an indelible history within the UK catering equipment sector.’

The awards were given at during the CEDA conference, at a gala dinner at the Majestic Hotel in Harrogate on 24 November 2021.

Former CEDA chair Peter Kitchin presented the duo with their Legacy Honours, noting that the pair has actually met at a CEDA conference, following which they formed the company in 1993.  FEM celebrated its 25th anniversary in 2018 and is now one of the UK’s top ten largest foodservice equipment companies.

Harry is the managing director of FEM.  He said, “It is a privilege to be nominated and I really appreciate the honour. I would like to say that my wife has been a great supporter over the years. My son Mark also works in the business, he’s a great support too and at some point I will be handing over to him.”