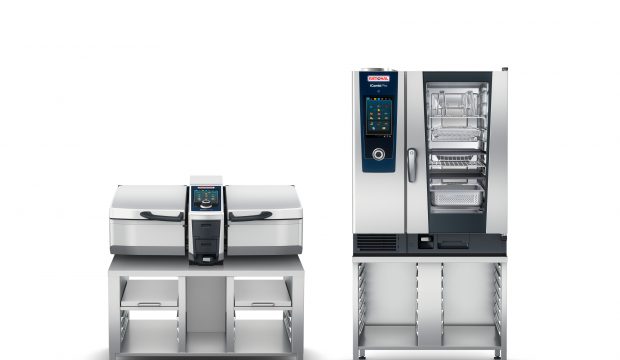 They may have only just launched on the market, but Rational’s new iCombi Pro and iVario Pro are already gaining admirers, with both models winning gongs in the prestigious German Design Awards 2021, in the “Excellent Product Design – Kitchen” category. The international jury said it was impressed by the well thought-out design of both cooking systems.

When designing the two new appliances, the Rational team set itself the ambitious task of bettering an already market leading product.  The resulting cooking systems now provide the maximum in terms of productivity, flexibility and safety in professional kitchens. Together, the iCombi Pro and iVario Pro cover over 95% of all conventional cooking applications.  Their cooking processes complement each other: while the iCombi Pro combi-steamer is mainly responsible for roasting, baking, grilling and steaming, the iVario Pro is mainly used for preparing soups, sauces, pasta and rice.

The two new cooking systems are the result of the combination of both customer and scientific research plus the engineering prowess that the industry expects from Rational.  As a result the iCombi Pro and iVario have exactly the right features to offer practical solutions to common end-user challenges. Solutions such as delivering maximum speed – for example, the iCombi Pro offers up to 50% higher productivity and up to 10% faster cooking times, compared to its predecessor.

However, Rational is particularly pleased that the external appearance of the two has also been appreciated by the German Design Awards judges. “We put a lot of drive and creativity into the design,” says Peter Wiedemann, Rational’s technical director. “With both cooking systems, we implemented the approach that ‘form follows function’.  Thus, a core feature of both models is the large and clearly arranged touch display, which controls all cooking functions and can also export data such as HACCP.  The exterior bodies of both models are characterised by clean lines and well thought-out ergonomics. The iCombi Pro’s attractive appearance is making it increasingly popular for front of house cooking, while the iVario Pro, with its rounded edges and non-heated crucible rim, shows that a kitchen workstation can also have an aspirational design.

“Of course, the appearance of the cooking systems is only part of the design process,” Wiedemann adds.  “Our aim was to deliver market-leading functionality in all areas, from performance to ease of cleaning, both inside and out.”  In fact, being able to keep a cooking appliance clean is essential not only for hygiene and safety, but also to maintain its good looks, throughout its long service life.  In order to keep downtimes between different cooking processes to a minimum, the iCombi Pro has an ultra-fast interim cleaning function that only takes about twelve minutes. Since nothing burns or boils over in the iVario Pro, thanks to intelligent heating technology, it can usually be cleaned by hand in just two minutes or so.

The German Design Award prizes will be presented officially in February 2021, in an appropriately safe setting.