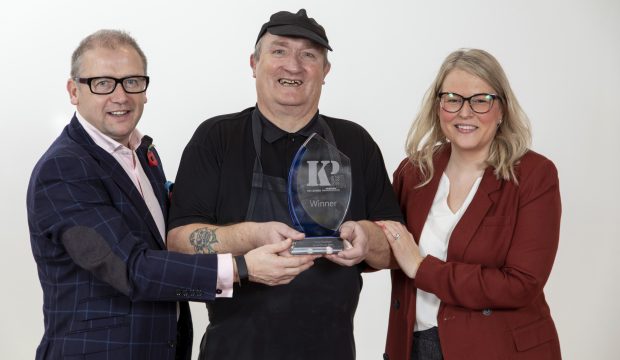 BaxterStorey’s Davie Fleetham is ‘an inspiration to the team’

Davie Fleetham has been a kitchen porter for BaxterStorey at RBS in Edinburgh for 17 years – and now he’s the 2019 KP of the Year.  The award was presented to Davie by Stephen Kinkead, managing director of the company behind the awards, Winterhalter UK, at a special ceremony at RBS on November 6th.

“I can’t believe I’m the winner,” Davie said.  “I knew something was going on today but I had no idea I was going to be awarded KP of the Year. To be recognised like this is amazing.”  When asked how he was going to spend his winnings he said, “My wife and I are off to Berlin for the Xmas markets soon. So I’m sure the prize money will come in very handy!”

“The team sees Davie as an inspiration,” says catering manager Lindsay Turnbull, who nominated him for the award.  “He bakes bread, cooks breakfast, checks all the equipment, cleans, delivers sandwiches to our other locations… he’s well-liked by our clients, customers and the wider team.  The senior directors know Davie – everyone does!”

Stephen Kinkead was impressed by the KP winner for 2019.  “This is a man who regularly wins awards from within his company – Star Award, Director Award and Dedication to the Business Award to name but three!” he says.  “The KP of the Year judging panel were rightly captivated by his dedication.  I loved the fact that he actually introduced homemade bread and scones to the business, and they’ve increased sales as a result.  Davie is a very worthy winner.”

Along with his KP of the Year trophy, Davie wins £1000 cash plus a celebratory dinner with family or friends.  His kitchen wins too, in the shape of Winterhalter equipment up to the value of £8,000.

There were two KP of the Year 2019 runners up prizes awarded.  They went to Cheryl Macdonald, who works at the Jury’s Inn in Fry Street, Middlesbrough, and Sam Idubor, who is at the Royal Airforce Club in Piccadilly, London.  They each win a trophy and £250 in cash.  All KPs who were nominated in 2019 will receive a KP of the Year apron, commissioned by Winterhalter and created by Oliver Hardy, in a presentation tin.

For more information about the Kitchen Porter of the Year awards, visit www.kpoftheyear.com