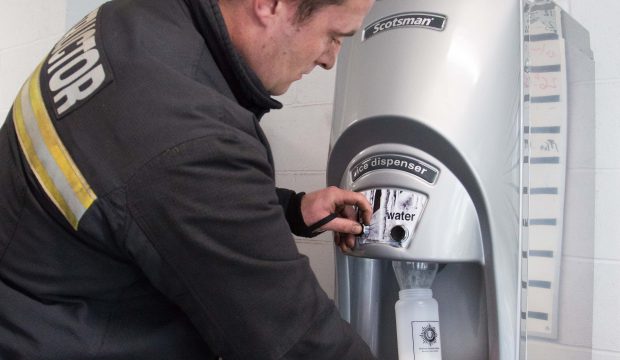 Scotsman brings a sense of cool control to a fiery world

Exposure to high temperatures and arduous activities during firefighting training can have effects on the human body due to raised core body temperatures.  For firefighters battling the blaze, or members of instructional staff supervising them, any type of relief from the heat can make a significant difference. One of the specialist institutions central to the development of making improvements to safety in these arduous conditions is the Fire Service College. The Cotswolds-based College is the home of firefighter development, with one of the world’s largest operational fire and rescue training facilities.

At the heart of the Moreton-in-Marsh site is a unique incident ground.  It provides learners with the

opportunity to train and exercise in a realistic and challenging environment in preparation for many of the situations that they could face in the field, from domestic building fires to road traffic collisions, and everything in between. Leading the way for the welfare and well-being of learners and staff on campus is Health and Safety officer, Bryan Gregory.

As part of his role, Bryan is heavily involved in the preparation routine of those he is overseeing. “The welfare and safety of our learners and staff are extremely important parts of our activities at the College,” he says.  “Amongst the most important forms of our safety and welfare are our hydration procedures.”

Water and ice dispensers are situated throughout the campus, with the Breathing Apparatus School using a Scotsman TC180 ice dispenser to keep participants cool and hydrated.

Being hydrated has always been vital for those fighting fire.   Over time the College has conducted on-site tests and worked with external bodies in the quest to pioneer the most effective hydration techniques.  One such study has seen the College in partnership with the University of Brighton.

Bryan and several other instructors participated in a study that involved a series of tests, which recorded how hydration and core body temperature are affected while carrying out firefighting duties. Bryan says, “Subsequently we have found out that by actually absorbing ice into the stomach prior to, during and after firefighting, the core body temperature of the firefighter or instructor is far better controlled and their performance and recovery are improved.”

As a result of this study, it became clear that the College could improve the performance and welfare of staff and learners with an ice maker that would produce ice that their bodies could quickly absorb. “The process of finding the right machine was done carefully, we took time making our decision and we tried a few different ice solutions, bringing machines onto site,” he says. After talking to Hubbard, the College trialled a Scotsman TC180. “We soon saw it was the right direction to go. Over the past eight months it has demonstrated its worth and is helping us to achieve our welfare goals.”

A counter-top, sealed unit, the TC180 is able to produce 135kg of ‘Cubelet’ ice – a small, chewable dry cube – over a 24 hour period, a capacity that hasn’t gone unnoticed by Brian, “It’s able to deliver the volume we need – at times we have 50 firefighters queuing up for ice and it keeps up with that.”

The condensed size of the ice cube has also impressed him, “The size of the ice is very important. We need the firefighters to actually absorb the ice and to eat it, rather than just drinking a cold drink, and, in my eyes, the cubelet is ideal for this. It works well with the drinking bottles we provide to our staff and learners.”

One of the most important roles that the TC180 plays is in the preservation of the welfare of those subjected to extreme temperatures. Bryan says that he has noticed a difference in the ability of learners to handle the heat and to recover after an exposure. “Since using the ice, we’ve managed to enhance the health and welfare of our staff and learners across the board; over the summer months in particular,” he says. “Absorption of ice also assists in recovery when staff or learners show signs of a heat induced illness.”