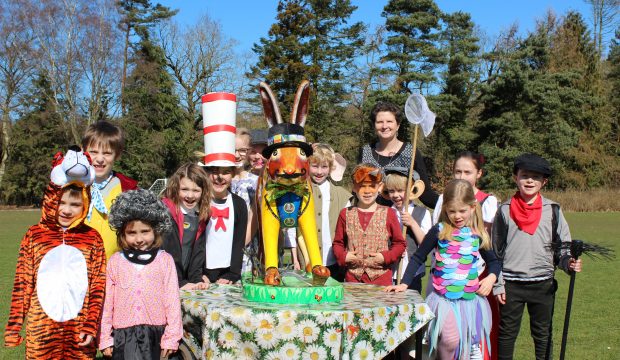 Village’s GoGoHare is a colourful critter with ‘tails’ to tell, out to raise funds for charity

Hare-atio is a GoGoHare with tales (tails?) to tell.  The school and community of Aldborough in North Norfolk combined to create a colourful critter that’s based on the schoolchildren’s favourite books.

Hare-atio is a baby GoGoHare (or leveret) and is part of the GoGoCreate project with Norfolk children’s charity Break and Wild in Art.  Lucy, who is ten years old, says, “I really like the hare, it shows what our school is about.  It’s really colourful and includes books, because we have a lovely library and reading is really important to us.”  The children voted for their favourite books to be part of Hare-atio’s outfit.  “We wrote the book titles for the jacket in gold, silver and white.  The book I voted for was Wonder. It teaches you to be kind to people because you never know what they are going through.”

Jack, aged seven, says the Aldborough hare is very creative.  “I think Hare-atio will be different to all the other GoGoHares, and he is a bit funny with his moustache,” he says.  “I voted for Danny the Champion of the World because it is by Roald Dahl and it is my favourite of all his books.”

Alison Read is Head Teacher at Aldborough. “Hare-atio’s creation was a real community affair,” she says. “Children, parents, staff, governors and members of the community all worked collaboratively to create him. Children’s fingerprints made his fur; their names and faces made the grass; they wrote their favourite book titles on the edges of his jacket; their top books have been used to decorate his hat.   Meanwhile a local textile artist made Hare-atio’s brilliant bow tie and a parent who’s a blacksmith made the lovely iron hares that decorate the base.”

Aldborough School is renowned for the quality of its reading – in fact its results are so good that a Minister of State wrote to congratulate the school in 2016.   “The children enjoy reading because we give them real books, high quality books, books that excite them and stimulate their minds,” says Mrs Read.

She adds, “We wanted a GoGo Hare who shared our passion for reading and our love of Norfolk – his name is a reference to our country’s famous hero, Horatio Nelson, of course. Plus we wanted him to have real character – and Hare-atio certainly has that.”

Thomas, aged nine, says “I think Hare-atio is fantastic.  I like the Shakespeare buttons, and the books on his hat, which shows how much we like reading.  I voted for Harry Potter and the Deathly Hallows because I love the Harry Potter series, I shared the book with my mum, it is the most exciting book I’ve ever read.”

The GoGoHares project features both large hares and the leverets.  The Sculpture trail of large hares goes live across Norwich and Norfolk from 24th June – 8th September 2018. Hare-atio and the other leverets (160 in total) will be on the streets from 2nd July to 2nd September.

The picture shows Hare-atio with some of the children who helped paint him.  They are dressed up for World Book Day as their favourite fictional character.  Mrs Read is standing at the back.