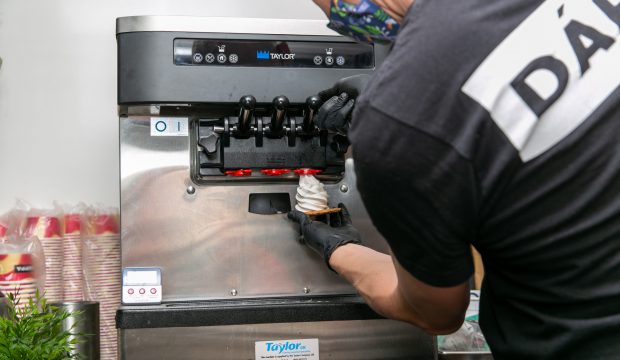 DÁPPA gets nutty with ice cream thanks to Taylor UK

Launched in 2019, DÁPPA is an ice cream company with a difference. Founded by Ollie Jones and Justin Martin, it makes a deliciously thick, rich and creamy soft serve ice cream. The difference? DÁPPA’s product is dairy free, and made from nuts.

“We set out to make a no compromise ice cream with the indulgent, creamy taste that people associate with the best dairy ice creams, but using only plant-based ingredients,” says Ollie. “Nuts are our secret weapon, naturally containing most of the ‘science’ you need to make great ice cream.”

During Justin’s early trials of the new recipe, industry insiders consistently informed him that it was not possible to make soft serve ice cream out of nuts. That didn’t put him off, as he tested early iterations using soft serve freezers supplied by Taylor UK. “Justin took his recipe down to Taylor’s test kitchen in Slough, and it was immediately obvious that making great ice cream with nuts was indeed possible,” says Ollie.

DÁPPA’s Madagascan Vanilla ice cream is blended from almonds and cashew nuts and they serve it with their house-made range of sauces and toppings. Ollie and Justin have aims to make DÁPPA widely available, with a growing range of partner restaurants as well as regular pop-up appearances around London and at festivals – when they were happening – in the DÁPmobile.

DÁPPA relies on a range of soft serve machines supplied by Taylor UK to make their product. “We have a number of different counter-top units, including C152s and C161s. They let us produce large amounts of ice cream, which allows us to meet the kind of demand you can get in busy London sites and at festivals,” says Ollie. “We needed equipment that we could rely on to keep pace with demand at peak times, and Taylor hasn’t let us down.”

The C152 is a single flavour countertop freezer capable of making up to 100 2.5oz servings an hour, while the C161 is a double flavour unit with a maximum hourly output of 200 servings. “Taylor’s new C generation machines are so simple to use,” says Ollie. “They’ve eliminated the switches of earlier machines, they’re controlled via simple push buttons. You know exactly what you’re going to get every time, which makes dealing with peak demand easier.”

The portability of the machines is another vital feature. “We can easily take them wherever they need to go. Back when festivals were still happening we would put a C161 into the DÁPmobile,” says Ollie. “With two freezing barrels, we can either double our output of vanilla, or we can have two different flavours going at once – and the fact that they run off a standard 13amp power socket makes it easy to get set up in new places.”

DÁPPA’s ice cream is extremely versatile. “We’ve created a variety of sauces and toppings, allowing us to offer a range of flavour combos like What The Fudge, Strawberry Cheezecake and the Peanut Butter Cup,” says Ollie. “And we’re also constantly surprised by what our partner restaurants are doing with it, not just with their own flavour combos but also making delicious thick shakes from the ice cream.”

The level of support DÁPPA gets from Taylor UK has been vital to their success to date. “Right from the beginning, they’ve been supporting us and making sure we’re getting the best out of our machines,” says Ollie. “The help we’ve got from the engineers allows us to provide guidance to the restaurants and foodservice partners we supply. Despite it being a large company, we’ve been able to build great personal relationships with the staff there, and they’ve been so enthusiastic in supporting our growth and spreading the word about our thick, rich and outrageously creamy ice cream made from nuts!”