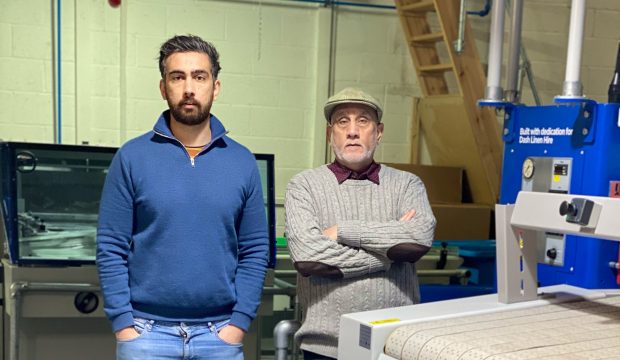 Dash Linen of Wimbledon, a family business with over thirty years of experience, operates a bespoke, high quality laundry service for a wide range of restaurants in London and the surrounding area. Like many commercial laundries it has been left to cope with the reduction in their business caused by the Covid-19 pandemic with no financial assistance from the government, putting the future of an industry that plays a key role in the hospitality sector at risk.  “We’ve been watching our business crumble before our eyes,” says Edward Syed, director of Dash Linen.

The Textile Services Association (TSA) is once again amplifying its concerns about the government’s continued lack of support for businesses within the hospitality supply chain. The vital role commercial laundries play in keeping hotels, restaurants and a range of hospitality businesses running is being overlooked, and could disrupt the expected recovery.

The TSA has been urging the government to provide the same level of help to commercial laundries supplying the hospitality industry that other businesses in the sector have been receiving. That includes rates relief; amending the guidance to local authorities on discretionary grants, so that commercial laundries can be included; deferment of VAT until payback is viable; extending the terms of government loans until laundries can afford to repay them; and making more loans available during the bounce back.

The experience of Dash Linen is typical of the stories the TSA has been hearing from its members since the first lockdown began last March.  “The majority of our customers have been closed since the first lockdown,” says Edward. “We’ve lost a few altogether, as they change their operation, and some have gone bankrupt owing us money. It’s a difficult situation for everyone but it’s not being made better by the government’s scattershot approach to which businesses receive help and which don’t.”

The lack of support has already caused staff redundancies. “Before the pandemic we were employing 63 people. We had to make 14 people redundant in June 2020 after our request for grants was turned down, and since then another five have left of their own accord,” says Edward. “We’ve had a very low staff turnover, normally. Some of our staff have worked with us for over 20 years – it’s a very difficult situation. And needless to say, making everyone redundant would put us in an even worse situation.”

During the period where restrictions were eased, Edward noticed a significant drop in business compared to before the pandemic. “We used to be working six days a week. But at that time, despite the hospitality sector opening up, it was down to two.”

Edward thinks the relative invisibility of the hospitality laundry industry might be behind the government’s lack of response. “Very few people know how many businesses rely on commercial laundries,” he explains. “If you look at every piece of linen in a restaurant, or every piece of cloth in a hotel, it will be regularly cleaned by a laundry. But this is a hidden side to these industries.  The importance of ensuring that supply companies like us, who are vital to keep other companies running, are receiving the right help isn’t getting through to the right people.

“We’ve built this company up through hard work, and while we’ve never been eager to claim money from the government it’s in situations like this, where almost all of our customers have had to stop operating, that we really need the support – and we’ve just been ignored,” says Edward. “It feels particularly unfair considering the reports of how much money has been going to giant chains that haven’t been particularly affected by Covid-19.”

Without support, it is difficult for companies like Dash Linen to plan for the future. “At the beginning of December 2020 we were thinking that we might at least have an idea of how long it would take to get back to normality, but then we were put into Tier Four and lockdown and it seems like the government is still playing everything by ear, hoping things will somehow just work themselves out.”

Keeping the company going during these trying times has been difficult, and has caused a lot of stress for Edward and his family. “Dad started this business, built it up from nothing,” says Edward. “Seeing something that you’ve invested so much of your life into put at threat through no fault of your own, of following the government’s rules and then being left out to dry, has been really tough for him, and me too.”

Edward hopes that the government looks again at its rules and reconsiders the limits in place for which companies are eligible for assistance. “At a minimum, we need rate relief for at least a year,” he says. “But the council keeps deferring making a decision about it. Similarly, eligibility for support from local authorities is set by how much rates you pay. We moved above the cut-off point by just £1000 at the end of 2019 after investing in a larger building, but it’s marginal and it doesn’t change the fact that hardly any of our customers have been operating for almost a year.

“The hospitality supply chain is being overlooked by the government, and it’s putting a lot of companies at risk. This will only cause yet more problems further down the line: without us, much of the hospitality industry can’t operate.  I just hope that the government realises its responsibility to SMEs in this sector before it’s too late.”

The TSA is the trade association for the textile care services industry. The TSA represent commercial laundry and textile rental businesses. Membership ranges from family-run operations through to large, multi-national companies.  Visit

If you would like to talk to Edward Syed of Dash Linen, his details are: