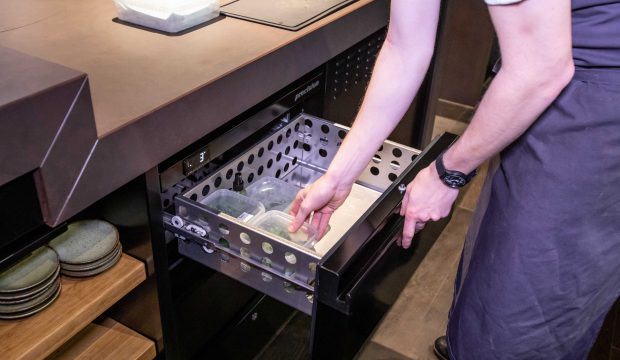 Within weeks of opening, Mana in Manchester has been hailed as one of the city’s finest restaurants. Set in a modern building with stunning architectural design features, including a curved glass wall and an open plan kitchen, it showcases a tasting menu designed by head chef Simon Martin, whose experience includes two years at Noma.

Diners are treated to an imaginative culinary journey, with the menu including dishes such as: pine dipped fried reindeer moss, and an elaborate wild duck platter. “There’s a lot of technique in our recipes,” says Simon. “But it’s all focussed on the taste, rather than just the technique.”

The focus on innovation and originality extends to every aspect of the restaurant’s design. Simon worked with CHR Food Service Equipment to create a kitchen as innovative as the food it would produce. To begin with, Mana showcases an open plan kitchen concept with no barrier separating the chefs from the diners.

“When you’re able to see exactly who you’re cooking for, and see their reactions to your food, It completely enhances the dynamic between the chefs and diners, and it’s fun for diners to watch too, of course!” Simon explains.

As well as this, the kitchen is also divided into temperature zones. “Each of the dishes we prepare has specific storage requirements for its individual ingredients,” says Simon. “It’s not just about what we do with our produce when it hits the pan or gets in the oven, how we store the ingredients can have a huge effect on the dish’s quality. So making sure we had the right refrigeration equipment was a very important part of the design process.”

The need to have flexible refrigeration equipment is why Mana uses equipment from Precision. “Once we started comparing what different brands could do, the choice was simple.”

Alongside the rock-solid temperature control system Precision is famous for, the customisation they can provide was a big part of the appeal. “Given that our kitchen is more open plan than most, we needed our equipment to fit in with the overall design aesthetic of the restaurant,” says Simon. The Precision undercounters at Mana are painted a powder coated matt black, allowing them to blend in with the rest of the design of the restaurant. All Precision products can be matched to any RAL number, making it simple to create a unified design.

“Diners are always asking about our décor, and the refrigerators have definitely got their fair share of attention,” says Simon.

The other customisation for the fridges at Mana was having them fitted with drawers. There were several reasons for this, Simon explains. “Firstly, they’re more space efficient, the drawers are much less likely to get in people’s way as they move around the kitchen. Secondly, with our temperature segregation scheme, drawers make it much easier to categorise and store ingredients according to our requirements.”

Another part of the refrigeration requirements at Mana involved installing a VUBC 121 variable temperature drawer in an Eco-Chef unit, a self-contained integrated cooking suite designed by CHR. The one at Mana is the largest made so far, and had to be customised to fit in with the rest of the equipment. The VUBC 121 unit allows for ingredient storage, right where chefs would need it. “It’s obviously useful to have refrigerated storage even in the hot section of the kitchen,” Simon says. “Precision were great at finding the exact right product we needed.”

The food at Mana is made with the finest British produce. “We put in a lot of effort making sure we find the best British ingredients,” says Simon. “Similarly, we wanted to make sure we had the most reliable, robust equipment in a professional kitchen. Precision’s equipment is very high quality, and it’s also good to know we’re supporting British manufacturers when we buy them!”

For more information check out the Precision website (www.precision-refrigeration.co.uk), or call the company directly on +44 (0)1842 753 994.

The following Precision Refrigeration products were selected in this kitchen design: