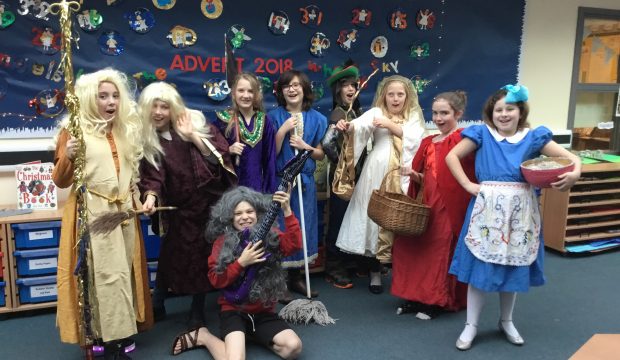 Robin Hood, Snow White and Noah – oh yes it is!

Robin Hood and his Merry Man, Snow White and the Three Dwarves…  Aldborough Primary School’s panto has been decimated by budget cuts this year.  However, the show must go on!  In this case, the school has pooled what’s left of the funds and come up with an exciting Christmas Mish Mash – including a version of Noah’s Flood.

Even better, it’s all for a good cause.  This year the popular panto is raising money for Hospice Ethiopia UK, the Norfolk-based charity whose work helps thousands of desperate people in Africa.

“It’s really a very different sort of panto,” says co-director and Class 5 teacher Jill Morgan.  “The mash-up sees lots of different classic pantomime characters desperately trying to get a plot together – before things get swept up in a sort of souped up Noah’s Flood…  I’m pleased to say the children have taken to it like ducks to water… which perhaps is just as well!”

The children are currently hard at work on rehearsing, with a show that features singing, dancing and, of course, plenty of cheers, boos and jokes.  The picture shows some of the year six children in costume, including (from left) God, the Noahs (Noah himself is clutching the guitar), Robin Hood, Main Marion, Red Riding Hood and Goldilocks.

Mish Mash The Panto will be performed at the school on Wednesday 12 December at 2pm, then on the 13 and 14 December at 7pm.  Tickets at £2.50 must be bought in advance from the school and numbers are limited (oh yes they are).